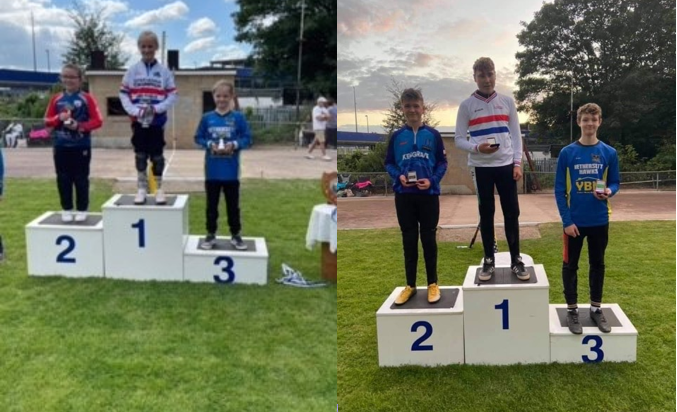 HETHERSETT HAWKS / YELLOW BRICK MORTGAGES had three riders taking part in the British Individual Championships weekend in the South of England and riders came back with two bronze medals.

At Southampton Lola Martin scored 10 points to finish third in the Little League  Under-10 Girls Championship despite having an opponent fall off directly in front of her in one race.  And it was double joy for the Martin family as Mason surpassed expectations to take third place on the podium in the British Under-14 Championship.  In his last race he passed all three opponents round the outside to bring his total to 17 points.

Mason moved on to Horspath (Oxford) two days later to contest the British Under-16 Championships.  He came safely through the qualifying heats – McKenzie Loombe was eliminated at this stage and he had a heavy fall.  In the Final Mason accredited himself well in a tough competition finishing joint 11th with 8 points – worthwhile experience for that age group in the next two seasons.

It is hoped their achievements will help to encourage many of the Club’s members to enter these iconic events next August Bank Holiday.