Hawks on the podium at the British Championships! 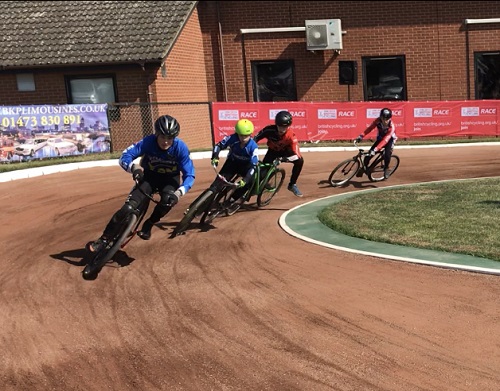 HETHERSETT HAWKS / YELLOW BRICK MORTGAGES had 10 riders racing at four different tracks in East Anglia contesting various British Championships over the Bank Holiday weekend.  Pride of place went to Charlie Lyth who came third in the Under-16 Final, the Hawks’ first podium place at the finals weekend for nine years.  Just one place from the podium was Glyn Morgan who was fourth in the Over-50s Final, falling when in third place in his fourth ride.

In the Open event  Harley Hamill and Leigh Cossey both had two semi-finals and amassed 19 and 17 points respectively, which were insufficient to make the cut for the Final.

Leigh Cossey, Charlie Lyth and Mckenzie Loombe all won their categories in the final Norfolk GO-RIDE series at Spixworth.  All three had won their finals at Spixworth.  Paul Delaiche (2nd) and Ben Loombe (3rd) also picked up series awards.

This Saturday Leigh Cossey and Glyn Morgan are both in action in the Will Burns Memorial event at Leicester.