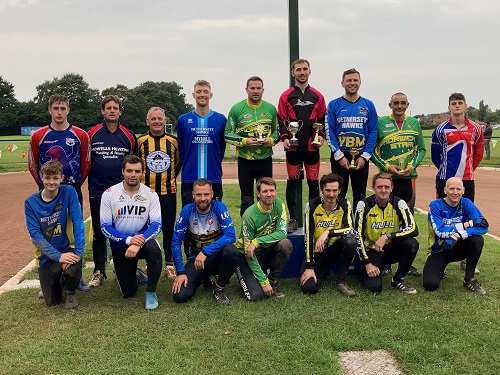 HETHERSETT HAWKS / YELLOW BRICK MORTGAGES staged eight hours of activities to celebrate the Club’s 55th Anniversary.  The day started with an open invitation to former riders to return and several did spanning all the decades.  The majority of them got back on a  bike to show that they had not lost their skills or speed – many were able to beat time trial targets set by founder and Chairman Mel Perkins, although the incentive of a bottle of beer if they did may have provided additional impetus.

A notable arrival was someone who, as a young teenager, was summoned from playing with his friends to make up a team one evening.  After five successful seasons with the Hawks he moved to bigger clubs and went on to win British and European titles – his name – Andre Cross.  If ever there was an inspiration for the 15 young Hawks who lined up next then this was it – from humble beginnings…..

With the young Under-13 Hawks given additional points depending on their age the Youth Cup was unpredictable.  Aiesha Musa sped to a maximum 20 points which included a tough race to pass Will Clarke but she was not assured of the winning trophy.  Luca El Labany had dropped just three points but he had a three-point handicap advantage over Aiesha so they both finished on a combined 21 points.  Aiesha may have thought a race-off would be straightforward until she was told that it would also be handicapped and she was destined to start a quarter of a lap behind Luca.  The young prospect set off fast and it was not until the start of the final lap that the determined Aiesha found a way past to take the top spot on the podium.

Harry Dodds had lost to only Aiesha so his combined 20 points placed him third overall while there were other notable performances by Oscar Copeland and Jamal Musa.  Austin Brailey was awarded the “champagne moment” prize for a last-bend pass in his opening ride and two others deserve a special mention – Maisie Skeet, who only started training  the previous day, and the youngest competitor Remy Davies, who had to endure three bike changes but carried on.

With rain threatening but not arriving 16 riders of a good standard lined up for the Hethersett Charity Cup, held every year since 1969, apart from 2020 sadly.  There were four ex-winners in the field and three riders who had travelled down from Hull for their first visit to the Memorial Playing Field but in the end there was little doubt who the winner would be.  Fast-starting Ash Hill from Ipswich was usually clear approaching the first corner and even a climatic heat 19 against unbeaten home favourite Leigh Cossey went the same way, particularly as this race was his grid one start.

Cossey could not pass his friend and rival Lee Grange in that heat but 18 points were enough to be runner-up as Grange earned a race-off against Owen Wells for third overall.  Both these riders had spells with the Hawks so know the track well but the experienced Grange held off a strong challenge on lap 3 to earn his place on the podium.  There was a cameo appearance from the entertaining ex-Hawk Olly Buxton but the Colin Chamberlain Memorial Trophy for the most entertaining rider was presented to Rory Freeman by Colin’s widow Debbie.

Ash Hill thus became the second rider to win three Charity Cups in a row – the first was Phil Pilbrow – and his fourth win overall. All trophies for the day were sponsored by Breckland Autos in Attleborough and the events raised £200 for charity, split between the Orchid male prostate cancer charity and the Hawks’ own track development fund.

Next Sunday the Hawks entertain Kesgrave in South East Leagues from 2 p.m.