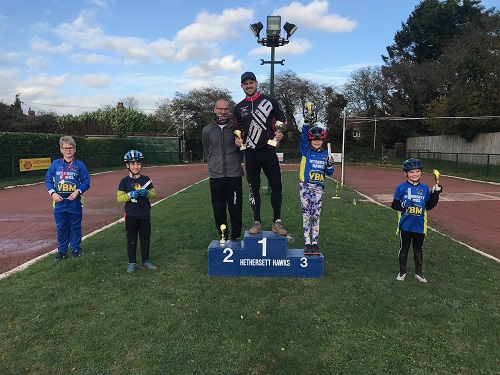 HETHERSETT HAWKS / YELLOW BRICK MORTGAGES were blown away into close season as strong winds greeted the five hardy competitors for the final racing of the season – the Club’s Maiden Plate for riders not having previously won any of the Club Championships.

It was good to see senior riders still active in early November which gives some encouragement towards whatever 2021 holds.  Norfolk Champion Craig Norton got his name on the Club’s Roll of Honour after missing the Senior Championship through illness.  He took this title with a maximum with mercurial Dan Butler finishing runners-up.  However it was the three youngsters that entertained the crowd with several passes.  Thalia Silver fell heavily in her third ride on the final corner but bravely took her final ride to ensure third place on the podium.  Ronnie Harding and Ralph Silvester took away additional trophies for their efforts, all provided by Yellow Brick Mortgages.

The previous day the Hawks staged their 29th and final training session since lockdown ended.  These sessions have been held in line with guidelines on Tuesday evenings and Saturday mornings.  A small band of volunteers have organised three 45-minute groups on each day, initially limited to six and then eight when racing was allowed again from mid-August.

The success of these sessions is borne out by the statistics which are amazing – 60 different people have taken part, 38 of them new to the sport.  Two-thirds of the competitors have been Under-12 and one-third have been female.  All sessions have been fun and very rewarding and have been well supported by parents,many of them keen to help.

With 15 tonnes of new shale track surface in the car park the winter is not going to be idle although the new lockdown will slow down progress.  Rest assured the track will be buzzing again in whatever format we can provide come March.