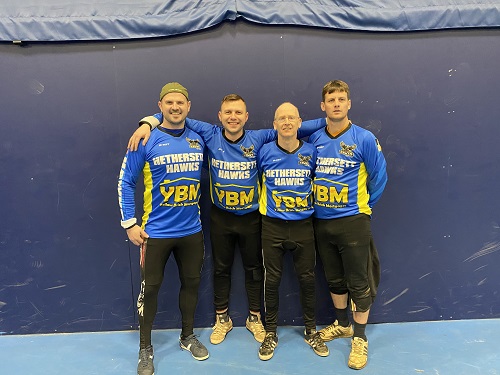 HETHERSETT HAWKS / YELLOW BRICK MORTGAGES sent an experienced team to Coventry for the British Indoor Championships on 4th January 2020 and put up a good show.  In their Semi-Final from which only one team qualified they finished joint third with all team members racing consistently well.  Craig Norton and Dave Martin each had an early second place.

Martin and Morgan also competed in the Over-40s British Individual Championship and it was Martin who provided the highlight of the weekend.  After a distinguished club career his return at his first major  veterans event saw him win one race, finish with 13 points and a position of joint sixth.  Morgan suffered an exclusion in one race which limited his scoring to eight points.  Despite an on and off career spanning five decades he surprisingly had never raced indoors before.

The team are now looking forward to the 2020 outdoor season starting in March.