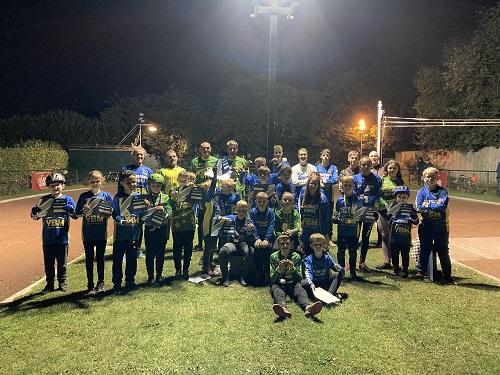 The final round of the Norfolk HSBC GO-RIDE and Senior Grand Prix Series ended eight consecutive Wednesday evenings of exciting racing and, on a perfect September evening under lights, a record attendance of 36 riders took to the track at Hethersett.  So competitive was the racing that there a number of crashes, including a couple injury scares for older riders, but in the end the racing proved to be the winner.

Apart from in the Senior category, the series winners were not in doubt but they did not have it all their own way.  Having said that, they did all win on the night – Max Pugh (Under-8s), Zachary Eastwood (Under-10s), Connor Jarrett (Under-13s racing up an age category) and Mason Martin (Under-16s), the latter again coming from last to first in a closely fought three-rider race bravely contested by McKenzie Loombe who earlier had withdrawn from heats after a painful leg injury.

The Senior category was the toughest round yet and it was series leader Jamie Medler who lost out as he was relegated to last place in the “A” Final and pipped in the final reckoning by second-placed Ben Loombe, the final having been won by Harley Hamill.

In total 49 riders have contested the series showing Norfolk’s future on the cycle-speedway map is well assured – the latest additions were Benedict Koehler and Rob Silver, whose swashbuckling style was a highlight for the crowd.

* on the night Stanlety Budds was placed third with 98 but a recount noted that Luca should be placed third despite only contested five rounds – he will receive an additional trophy at a later date.

All of this would not have been possible without a lot of hard work from officials at Hethersett, Norwich and Spixworth for whom the riders and parents / supporters showed appreciation with a loud round of applause.

Next stop for all these riders is the Norfolk Championships to be held on Sunday October 17th at Eaton Park – eight categories to be contested over five hours starting at 1 p.m.